Celestino Cortina Cuadra, founder of Sidra Cortina, was known in his lifetime for being an enterprising and enthusiastic man. His father passed away when he was only seven years old and from a young age he would help his mother and grandparents with the modest family cider mill (“the Nonzalera Cider Mill”). Since a child he would help gather apples, fetch water from the river to clean the vats with, or remove the pulp from the press, among other tasks.

He married Palmira Noriega Torre in 1950 (awarded the 2009 Tonel de Oro prize in Gijón), who was brought up in the cider house and shop belonging to her parents in Bayones. In 1952, Celestino Cortina Cuadra decided to invest strongly in a business that few believed in back then: cider. “The prettiest hamlet in Asturias”, Solares de Coru (Villaviciosa), saw the beginnings of “SIDRA CORTINA”.

Over the years, he began to receive merited recognition for the quality of his cider. It was a difficult time in those days, when the market was quite small. Nevertheless, before Celestino Cortina Cuadra’s premature death, Sidra Cortina had managed to become part of the select group of the best natural Asturian ciders.

His son, Eloy, took over the running of the mill when he was just twenty years old and was responsible for the expansion of the family trade name. Eloy multiplied production and progressively incorporated technology, being the first to automate bottling lines and presses. He also began to branch out into new markets. Madrid and Belgium have sold Cortina cider since the end of the 1970s.

The 5th of February 2001 saw the inauguration in Amandi of the “Llagar de la Ferrería” (Ferrería Cider Mill). It is a milestone in the history of Asturian cider for being the first modern cider mill in Asturias and which saw Pablo and Tino, Eloy’s two sons, join the business. It marked a new generation of cider millers.

And the business still thrives today from this privileged spot in Amandi where technology and tradition work together to mill our apples year after year as always to become our well-known cider. 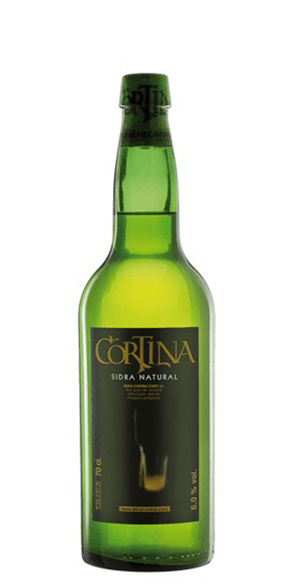 After a careful selection of the best varieties of cider apples from the Principality of Asturias, we obtain apple juice which is then pumped to our storage tanks where it is fermented under individually controlled temperatures. Finally, following tradition, it undergoes racking when the moon is waning at the beginning of the year, and then it is matured in oak vats. The result is a fresh, straw-coloured cider with a fruity aroma which is easy on the palate. It is a natural quality cider with its own distinct style.